This week’s midweek music is unique. I am featuring a different kind of singing.

It is singing in protest! 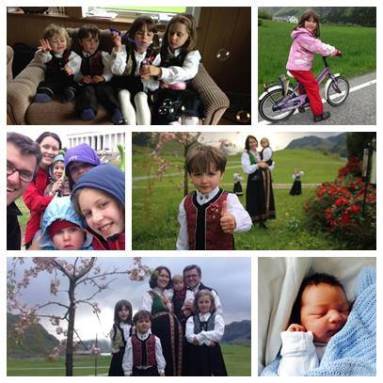 Once upon a time, actually just two months ago in November 2015, two sisters were in school in Norway and were humming the tune to a Christian song. The song “He’s Got the Whole World in His Hands”. The teacher overheard them and realized they were Christians…and that’s when it all started.

That very day, the two sisters were mercilessly taken away from their family by the “child protective” services of Norway, named Barnevarnet. They were snatched directly out of school. A few hours later, Barnevarnet went to their home and snatched the two younger brothers who were at home. It didn’t stop there.

The social services arrested their father who was at work, confiscated his phone and didn’t allow him to call anyone, didn’t explain the situation fully, and did not allow him to hire a lawyer. Sounds like the Nazi’s in WWII doesn’t it?

And listen to this outrageous part of the story. As the mother was still in shock over it all, Barnevarnet “child protective” services later came and heartlessly kidnapped the youngest child of the family  – a 4 month old breastfeeding infant, right out of the mother’s arms! This Christian family was falsely accused by Barnevarnet (“social service”) of indoctrination. Read details about their story at the link at the end of this post.

This is the story of the Bodnariu family. A Romanian family in Norway who had their children kidnapped by the Barnevarnet social service.

Norway, you claim to be nearly 90% Lutheran as a country, and yet you allow Barnevarnet to do these horrific kidnapping acts? How contemptible!

There are peaceful protests going on all over the world over this horrific act. In the United States, Spain, Poland, Germany, Italy, Austria, Romania etc…. It is all over the news in Europe.

So I am joining in the protest.

Protest against a heartless, sadistic nation who ruthlessly stole away innocent children!

They wanted to silence these Christian girls who hummed a Christian tune? THEN….We will sing!! Our voices will ALWAYS be heard. Loud, strong and clear! Till God brings back those children. The Lord will avenge His children!

Norway, you may have tried to stop the Bodnariu girls from singing-  but the singing has spread all over the world!

Listen to these Romanian protesters sing in Brussels in protest against Norway.

Lyrics to the Romanian song the protesters sang:

“O how beautiful it is to be in a family,
The holy family of the Lord Jesus Christ”

CHORUS:
“We are a united family, We are a real family,
A family that loves, The family of the Lord Jesus Christ!”

Keep this family in your prayers and spread the word!

“And Asa cried unto the LORD his God, and said, LORD, it is nothing with thee to help,
whether with many, or with them that have no power:
help us, O LORD our God; for we rest on thee, and in thy name we go against this multitude.
O LORD, thou art our God; let no man prevail against thee.”
(2 Chronicles 14:11)

Facebook Page for the Bodnariu family. Details in the news, and here.

6 thoughts on “Midweek Music XVIII: In Norway, it is a crime to sing”