A couple weeks ago my family and I went to the best airshow in the world- Miramar Air Show! I may be biased but I don’t care, because once you come see it in person, you’ll be convinced I’m right. Seriously.

According to the MCAS military base, nearly 700,000 people came to the 3-day air show this year! It’s the largest air show in the country, and we had a fabulous time!

Watch this promo video to get a glimpse of the impressive performances. The video is circa 2010, but it’s my favorite video of this air show:

You’ll have to pardon the low quality pictures. We didn’t have the big cameras we usually use (borrowed from my cousin), so we ended up with our little digital camera this time. I edited the photos as best I could…think of them as instagram photos and everything will be okay. Lol!

At the entrance, ready and excited for the day

Love that red, white, and blue up there for everyone to see! 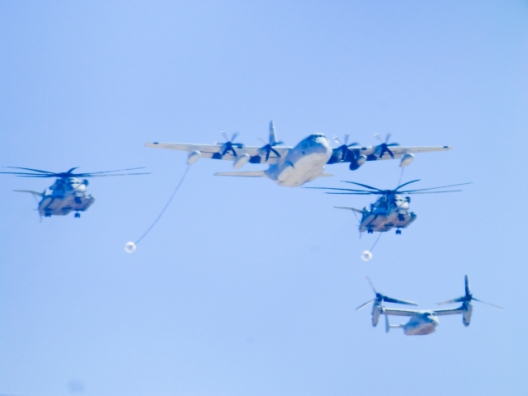 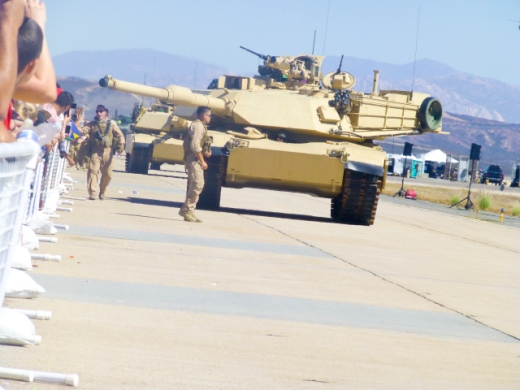 The MAGTF (Marine Air Ground Task Force) is a favorite!
You get to watch a little demo of how they deploy in enemy territory, just like in the movies- but better.
It comes complete with elite Recon Marines zipping down a rope from a helicopter,
jets dropping bombs,
tanks rolling in, and a wall of fire exploding!
Of course it’s all simulated but the fire is real- so you feel the heat.

Tiny Marines hanging from a rope… 🙂 too bad our zoom wasn’t that great.
This is when you feel dwarfed by the people with the big guns, like the man below with his massive lens

And the old familiar Sea Knights. It’s the last time we’ll see them around…they’re being decommissioned this year and replaced with Osprey aircraft. I’ll miss seeing them around. 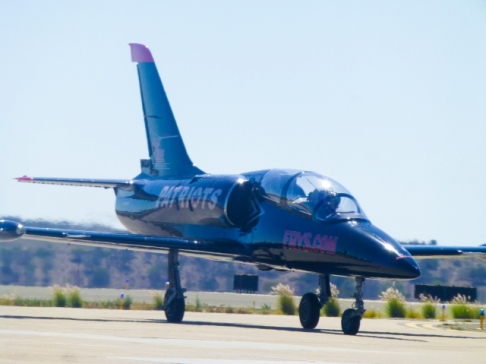 The Patriots dazzled us with their feats in the sky.
They’re a civilian jet team with experienced pilots that have military backgrounds. 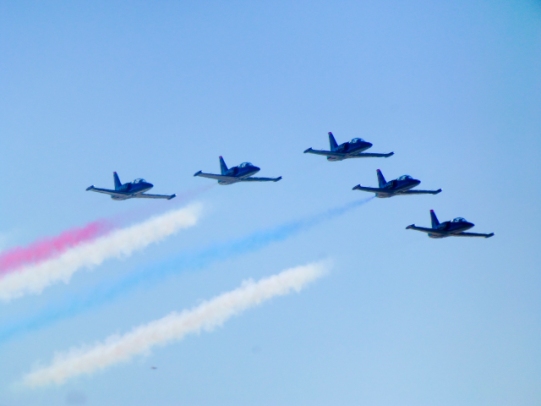 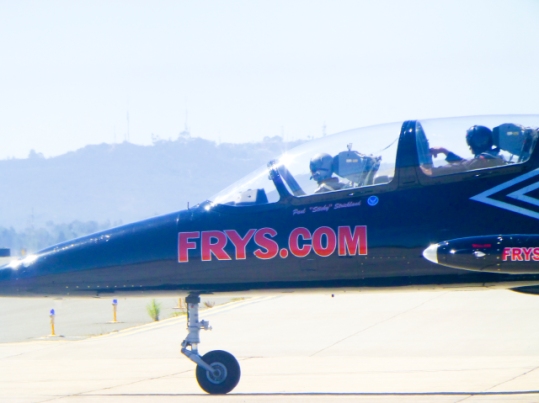 After their demonstrations, you can go meet the pilots in person, ask them questions and take pictures.

Fans can even get their autographs on free posters they hand out.

This is a picture from my mom’s phone.
It looks like we’re all doing a synchronized wave or something,
but we’re just shielding our eyes from the sun.
If you stop and look around you at the air show, it’s pretty amusing to see a whole mass of people all gazing up in the sky, turning their heads left and right as they follow the jets & planes.

And The Patriots even made a heart in the sky
as an appreciation for the military families on base…so sweet!

The Fat Albert of the Blue Angels Team.
I love watching this massive whale take off, but we didn’t get pictures of it in the air

The Blue Angels jets. When you feel the roar of these jets reverberating in your chest
as they zoom past, it sure makes you feel quite tiny.

After the MAGTF demonstration the team rolls by in their tanks and trucks
to greet the audience, shake hands and give high fives 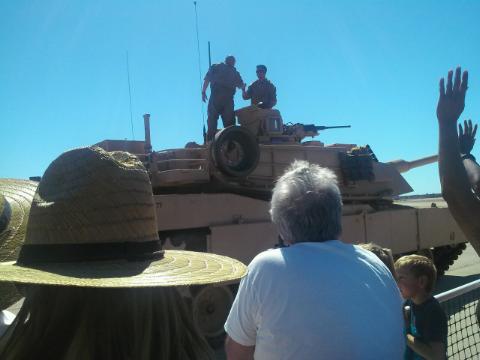 And because we’re a generation of “selfies”, one guy stopped to get his selfie taken with the crowd
as he stood on top of the tank.

We touched the muzzle of a tank while it was still smoking after it fired- just kidding!
That smoke was in the background, from an explosion
but we really did touch the muzzle as the tank passed by.
The driver (you can see his helmet peeking out down there) rotated it toward us
as a way of “shaking hands” 🙂 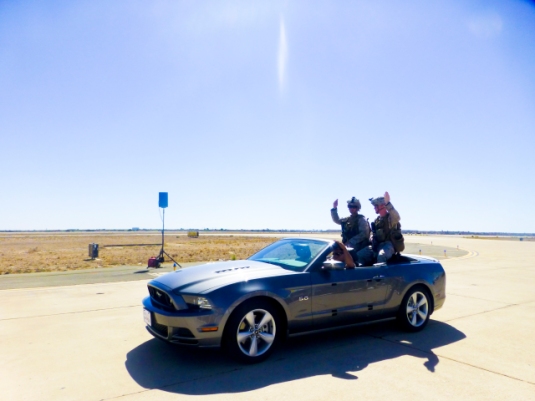 Others sported the “royal wave”

A real special treat was the first time public demonstration of the F-35B Lightning.
It was able to hover in place like the Harrier.
We were among the first few civilians to get to see it live in action!
It made me feel really special, let me tell you.

I saw it with my own eyeballs people! 🙂

There it is again

And one more from another angle, just in case you missed it

Here’s a little military supporter, proudly showing off her colors 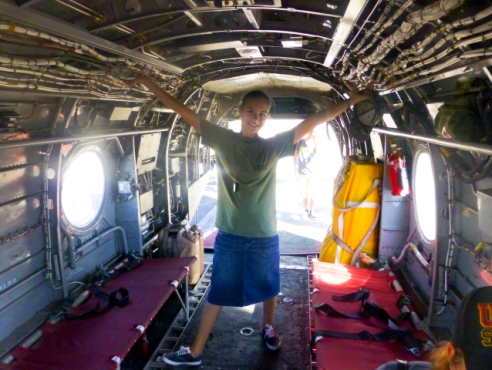 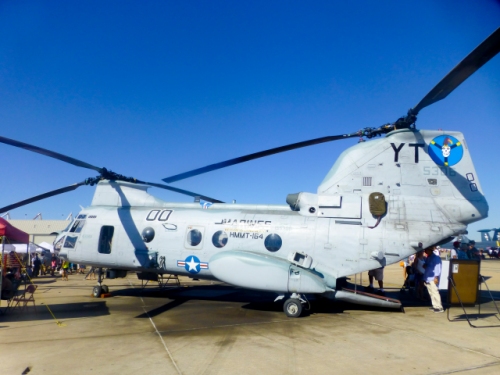 We reluctantly headed back home after a fabulous day! 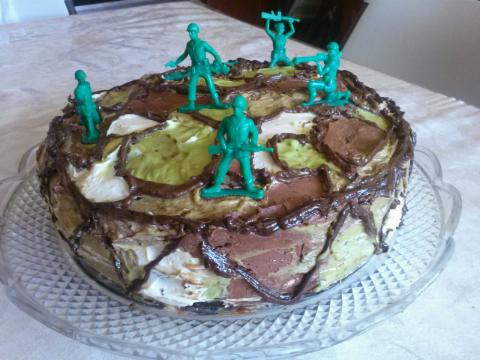 I had to end this post with a cake. This was the camouflage cake we made
for my little sister’s birthday, per her request.
She even specified that she wants soldiers posing on top of it!
It’s homemade from scratch, so it may look a little squiggly,
but it has natural ingredients and no food coloring which makes it a great cake.

Finally, when you have time, watch this documentary video about how the Blue Angels train for their shows. It’s quite inspiring to see their dedication, hard work, and professionalism

2 thoughts on “Best Airshow in the World”